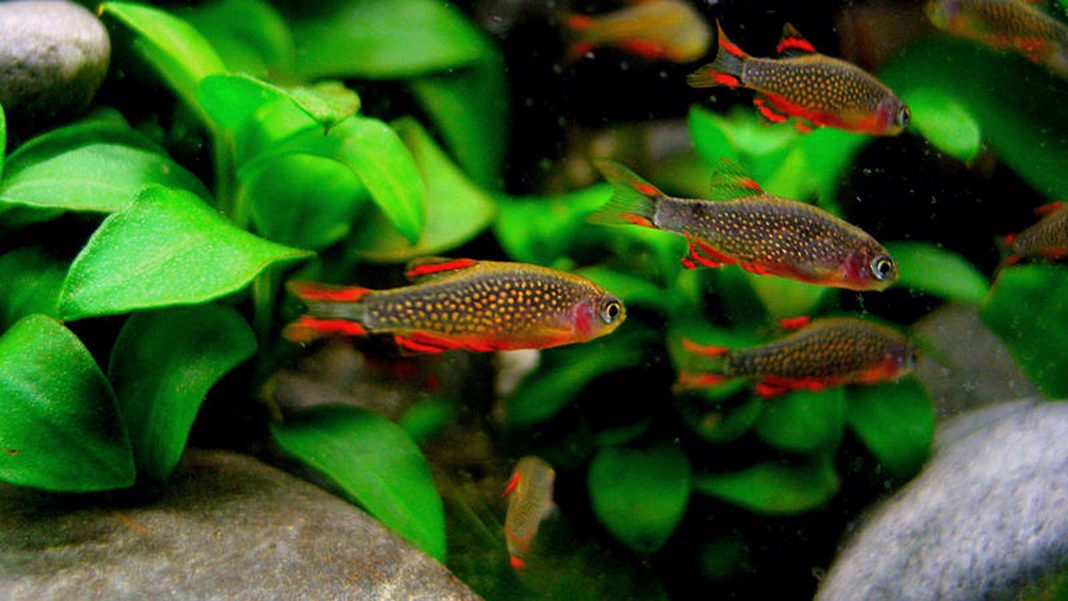 In the fishkeeping world, it is known as Rasbora Galaxy (or Microrasbora Galaxy), but its real name is Danio Margaritatus. In August 2006, an acquarium fishes exporter from Burma (Myanmar) put up for sale some specimens of this small cyprinid, which is characterised by extraordinary colours…

From that moment on, photos of this fish appeared on websites and aquarium forums, and it has been summarily named “Rasbora Galaxy”, or “Microrasbora Galaxy”; to someone it seemed really similar to the “Microrasbora” erythromicron. Somebody even assumed it was a joke, and that its wonderful livery had to be the result of a photo editing.

On February 2007, an article written by the American ichthyologist Tyson R. Roberts was published. He scientifically described this fish, classifying it as Celestichthys Margaritatus ( from Latin caelestis = celestial, heavenly and margaritatus = adorned with pearls ).
Robert’s classification was not, however, considered satisfactory to the scientific community; therefore, in 2008, our cyprinid was assigned to the newly-born Danio genus (Conway et al.) .
The current name of our descriptive card is then Dario Margaritatus, but it keeps getting called
with its previous names too.

Danio Margaritatus has usually a length between 2 and 2,5 cm ( from 0,39 to almost an inch ), but it can reach about 3 cm.
This fish has narrow flanks, a tapered silhouette and a clear dorsal curvature.
His mouth is tiny and central, pointing upward; the eyes are big and slightly protruding.

The clearest feature of this cyprinid is the dark blue livery dotted with white (yellow, sometimes) spots. The back ranges from yellow to orange, the belly from orange to red.
Fins have red/black stripes placed horizontally.
Sexual dimorphism is quite evident

The male displays brighter colours and the last part of the livery, blue in males, tends to olive-green in females.
Females have a convex belly, in a most noticeable way than males.
Life expectancy in captivity is estimated at 2 – 3 years, but it can reach up to 5.

The first discovery was made in a pool of water near Hopong, in Burma. This is a resort located at more than a thousand meters ( over 3000 feet) above sea level, in Shan State, an upland crossed by the Salween river.

Those pools of water are formed seasonally due to the river’s overflows, which cover the surrounding grassland.
When they were found, the water hole had crystalline waters, a depth of less than 30 cm (almost 11 inches) and a temperature, on January, of 22-24 °C (72– 75 °F).
The presence of a lush aquatic vegetation was reported, mainly made up of Ancharis ( Egeria or Elodea ).

Later, other findings occurred in Nam Lang and Nam Pawn rivers ( both in Saluen’s basin ) and on the east side of Inle’s lake ( Shan’s upland ); some specimens have been found in Thailand too, on the border with Burma.
The only constant in the findings seems to be a not too high temperature ( that in the cold season can go down up to 10 °C – 50°F – or less ).

For this reason it is recommended not to exceed 25/26 °C (77/79 °F ), but they seem to tolerate, although for short periods of time, 30°C too ( 86°F ).
This fish has generally been found in soft waters with a moderate acid pH, but also in slightly alkaline water. Probably it is an adaptable species, as the main part of the Asian cyprinids.
The south-east of Asia is characterised by rainy seasons indeed, which modify waters’ properties ( temperature, acidity and hardness ).

First of all, let us remember that Danio Margaritatus is a prey; this is the reason of his “shy” behaviour. If the school is quite crowded ( at least ten specimens, but more than twenty is better ) and the aquarium has a heavily-planted set-up ( so that it can offer covers and hiding places ), the Danio will become more enterprising and proactive. We will see brighter colours, a more courageous swim ( lonely, with sprints and chases ) and more complex social behaviour.

It is only in these conditions that our small cyprinid proves to be a hierarchical and competitive fish.
Males may display aggressive behaviours against conspecifics, especially for food and territory. These fights are generally dealt with a circle dance untill the weakest quits the conflict; sometimes, quarrels are more violent.

A large tank, with plants and roots as barriers between a part of territory and another one will make more peaceful their cohabitation.

Despite its small size, it is better to host it in a large and spacious tank, which allows him to carve up the space and give it the possibility to swim as it prefers.
We should set up an aquarium with a dark substrate heavily-planted. Asian plants are perfect; obviously Anubias and Egeria are fine too.
It is frequently recommended to insert floating plants in order to screen the light, that generally is plentiful in planted tanks.
Mosses are an ideal substrate to spawn; their presence will help reproduction.

This fish does not seem to like churning water, so it is preferable to limit the water pump’s flow rate ( or breed it in a tank without filter ).
In the discovery’s water pools others fishes were found: Microrasbora Rubescens, some non-identified specimens of Yunnanilus species and Channa Harcourtbutleri ( probably, the only predator of Danio Margaritatus ) .
Avoiding ( obviously ) predators, Danio margaritatus can live with others tiny pacific Asiatic cyprinids as Trigonostigma, Boraras Birigittae, Microdevario Kubotai or Tanichthys Albonubes. They can share the tank with a Betta too, as long as you don’t care for reproduction.

They can also peacefully live with Caridina.
It should be avoided the combination with Danio Erythromicron in order to avoid hybriding.
It is also discouraged to insert impetuous or aggressive fishes, which could intimidate Danio until they stop eating.
Due to high visibility of this tiny fishes, caused by both their behaviour and their magnificent livery, it should be considered the idea of a monospecific aquarium.

Danio margaritatus has reputation as a “difficult” fish for what concerns food. This does not mean it is a picky fish, or that he has particular feeding problems.
It is true that he prefers live food, particularly Daphnia, young Artemia and small nematodes.
For what concerns Artemia, its injection requires some care: sometimes, non-decapsulated Artemia cysts had caused fishes’ death, probably for intestinal obstruction.
It accepts dried food too, especially if this has a small size ( Don’t forget that this fish has a very little mouth ).
If Danio is bothered it does not feed topside, so it is better a sinking food ( and a floating one to keep others fishes busy ); when he is quiet, he can also eat large granules, that he nibbles.

The real problem with food depends by the cohabitation with other species. If they are correctly combined, feeding Danio is not a problem; but if they are kept with bigger, restless or aggressive fishes, they will be frightened and they are going to struggle for food.
In a not very suitable set-up, our fishes will show a sunken belly, and they will waste away until the death by starvation.
We recommend again to pay attention to the choices for tankmates, and we suggest to consider a monospecific aquarium.

Reproduction in captivity occurs spontaneously; in order to facilitate it, we can insert into the tank mosses or a DIY “mop”.

At this stage, the male ( which shows off a particularly bright livery for the occasion ) goes in front of the place chosen for spawning, the snout pointing down, the body slightly curved and vibrating fins, waiting for the female.
When the female approaches, the other pushes her to the chosen place; she lays eggs and he fecundates them.

For each spawn, a female can deposit up to 30 eggs.
At a temperature around 24 °C ( 75 °F ) eggs hatch approximately after four days.
After the eggs’ hatching, fries have a dark pigmentation ( camouflaged ) and they stick to surfaces thanks to sticky structures which they have on their head.
After 3-4 days, they begin to swim, lose their dark pigmentation and they can be fed with micro-organisms. In this period they are an easy prey for other fishes (Betta, for example).

Fries rapidly grow up and they don’t need special cares; after 8-10 weeks, body’s shape becomes to resemble the parents’ one. After about 12 weeks, they begin to get the colours, too.

IUCN ( International Union for Conservation of Nature ) has included Danio Margaritatus in the red list of species potentially at risk of extinction with this comment : “  Collection for the aquarium trade potentially poses a risk to the species, with local collectors only finding a “few dozen fish per day” at the type locality, though new populations elsewhere have now been reported.”
There is, however, a lack of reliable data about the population’s consistency, and this species is considered DD, Data Deficient.

In February 2007, Burmese government forbade the exportation of this fish to avoid its possible extinction.
This ban has proved quite flexible ( fishes, in fact, are still exported ) because the raising of this fish is is an important source of income for local population ( in 2007, a person who harvests fishes as Danio margaritatus could earn up to 80 euros a day ).

Over the years, it turned out that the captive breeding of this fish is fairly simple.
This has allowed that the greater number of Danio Margaritatus on the market comes from farming and not from catching.

We are most grateful to our users Monica, pantera, Giordano16491 and MatteoR, which have contributed to the article’s drafting with their experiences and photographies.

For any information or, if you want to share with us your acquariums, we wait for you on our dedicated forum Acquariofilia Facile.