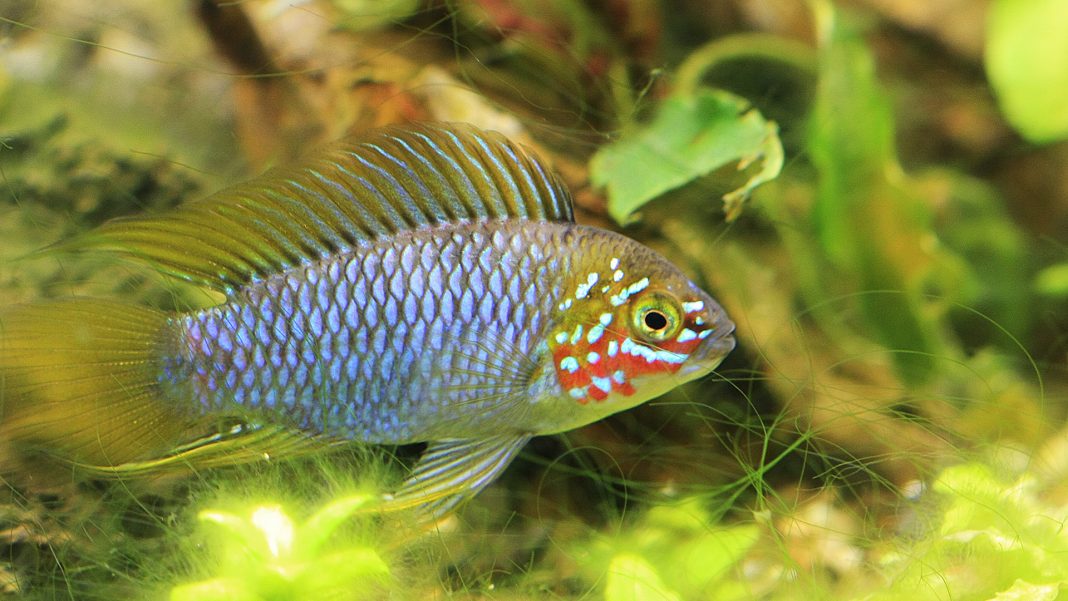 Apistogramma borellii is a small south-american cichlid, belonging to the category fishkeepers use to call “dwarf-cichlids”, for their size. Its one of the easiest fish to keep in our aquariums.

Often it’s spelled as “borelli” with one “i”, due to a common error widespread on the web.
Anyway, even without knowing latin grammar, we can try to search for it on the ICZN (International Commission on Zoological Nomenclature).
Their browser correct us this way:

Aside particular cases, due to human intervention, Apistogramma borelli can be found only in the Paraguay river.
It’s a steady river with a slow flow and a significant river bank, whith a path of more than 2600 km (1615 miles) in a mostly flat terrain. 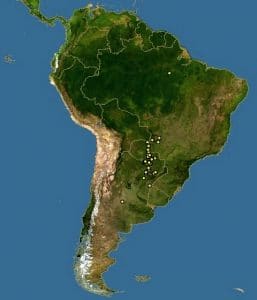 What happens with this low slope can be seen in this image: 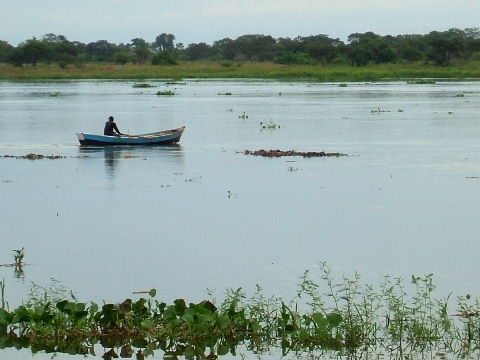 Wide still stagnant marshes, with less than a meter of water, completely flooded by periodical floods.
Even in the riverbed the water has reduced speeds.
For this reason, as many as other aquarium species, Apistogramma borelli enjoys still waters, or with a gentle movement.

Somebody could tell you to keep them in 30 liters (5.5 gallons), but its an extreme, and you should consider to not have any other fish, of any kind.
Considering roots, woods and plants, we suggest you to start from 50 liters (8.8 gallons) on.

The borelli doesnt require any particular substrate, but we suggest you some thin sand, to match Corydoras Aeneus’ or Paleatus’ requirements, since they are frequently added with borelli.

The Apistogramma borellii enjoys shadowed areas.
For this reason its preferred to use large leafed plants, to create a barrier for the light reaching the substrate.
Floating plants are an option too.

Woods, roots and coconut shells will be appreciated too…

Especially during reproduction period, since they are used as cover and repair.

The Apistogramma borellii evolved into 3 varieties, depending on the geographic area, with siginificative colour differences.
For this reason, the german magazine DATZ (Die Aquarien und Terrarien Zeitschrift) gave him 3 serial codes A102, A103, A104.
Fishkeepers know them as var.”Bolivia”, “Paraguay” and “Uruguay”.

There’s also another code, the A105, related to the “Opal” variety, which doesnt exist in nature (but is the most common in shops).

It is so possible, looking trough the various classifications, to find significative differences about water values.
Mato Grosso marshes are way different from Argentina’s ones, both for medium values and variability.

We can read, sometimes, about temperatures below 15°C (59 F), or about pH below 5 points, but those are extreme cases we suggest not to replicate.

When we buy them, we usually dont know which variety we got in our hands: for this reason we will give you the values suggested for any A.borelli, because they range between medium values, safe for every variety.

In the Paraguay’s rivers, Apistogramma Borellli meet various species of characids.
Hyphessobrycon Eques, Hyphessobrycon Megalopterus and Gymnocorymbus Ternetzi are the most common in shops.

Often, in our aquariums, they are paired with “Neon” fishes (Paracheirodon innesi), even if they dont share the same geographical area in nature.
We’ve already talked about Corydoras in a previous chapter.

Apistogramma borelli is peaceful sharing the tank with most fishes, but it gets aggressive during reproduction period.

We didnt consider the presence of most of Echinodorus, since they require bigger setups.
Even for the plants, we considered only the most common in fishkeeping shops.

In nature it’s carnivorous, as most other dwarf cichlids. It feeds on worm-like invertabrates, that they usually find in the substrate.
The general idea should be to feed it live foods or frozen ones, but it accepts granules and floating foods too.

The foods it’s important to be very proteic, as most as others carnivores.
Since this high nutrition value, dont exceed on feedings, nor on portions or frequency.
Avoid cereal-based foods, usually avaiable in shops.

Deposition occurs in cavities or creeks, made by aquarium interiors.
Vases and coconut shells are preferred.

The female lays between 50 and 100 eggs, depending on her age and diet; after the opening, she is the one who takes care about freys.
The male has a “sentinel” role, patrolling the area.

For the first days of life, freys should be fed with Brine Shrimps, 2/3 times a days, just after the yolk sac is gone.
Nowadays some specific granular foods are avaiable; based on various experiences, they work just fine.

After a month, we can start providing them frozen foods, but with small dimensions (for example, Cyclops) or granular frey foods.

It has been described by Charles Tate Regan in 1906, a famous ichtyologist from the British Museum, who received some specimen from another italian scientist: Alfredo Borelli.

Between 1894 and 1899, Borelli was working in South America, for the Università di Torino.
He was mostly studying insects, right in the areas aside the Paraguay’s river.
Not having enough experience for fishes, when he saw the Apistogramma, he asked for help to his colleague, who described the new specie, dedicating it to the man who found it.

Only in 1983, the situation has been clarified by Sven Kullander.

Anyway, most of the scientific community has some doubts, as for many others ciclids; Probably the research is still far from its end.
Of course this article is based on confirmed publications.

We thank the authors of the used photos, released under Creative Commons license, and we hope to find you on our fishkeeping forum Acquariofilia Facile.